Sunday afternoon saw the latest outbreak in a long line of incidents of football-related violence in Brazil.

Before the game between Rio de Janeiro rivals Botafogo and Flamengo clashes between groups of supporters outside the stadium resulted in a 28-year-old Botafogo fan being shot dead and seven others being admitted to hospital, amongst them a man who had been shot in the face and remains in critical condition.

The game took place in the Estádio Nilton Santos, the venue for the track and field events at last year’s Olympics.

Violence, and death, related to football is common in Brazil; in the period between January 2010 and April 2016 113 murders were recorded by police as being directly related to football, making it the country with the highest levels of such killings. It is a stain on the game in the country and measures to reduce the violence in recent years have been mostly ineffective. 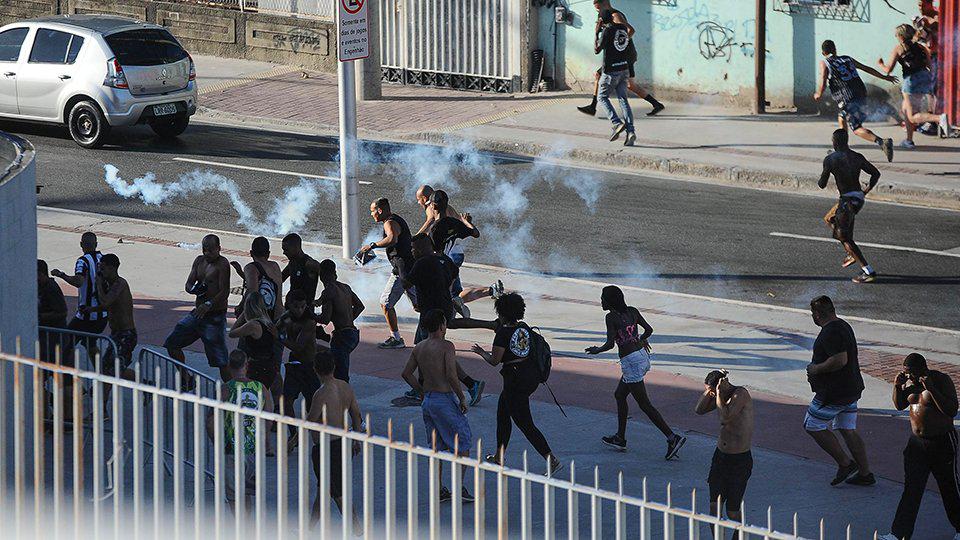 For Sunday’s game there was the added problem of police shortages. The attention of the Military Police, the branch of the Brazilian security forces that is charged with supervising stadiums on match days, was diverted by protests led by their own family members over the fact that the state government has not been paying their salaries on time.

A Globo Esporte article quoted an unidentified member of the Military Police as saying that only 52 officers were present at the game and only two more arrived as reinforcements after the trouble was reported. Usually at a match between the two rivals there would, according to the report, be between 160 and 180 Military Police officers deployed.

If this account is correct it would mean that there were fewer officers at this game, between two huge clubs and intense rivals, than there were at the game between Botafogo and minnows Nova Iguaçu on the opening day of the Brazilian season just over two weeks ago. This represents an immeasurable failure on the part of the authorities and makes the situation appear entirely avoidable.

The vice president of Botafogo believed that the match should not have gone ahead. They were forced to proceed, however, and Flamengo emerged with a 2-1 victory, a victory empty and meaningless in the light of the death outside the ground.

After the match Botafogo released a statement that said; “All the violence that surrounded the derby, leaving damage and injuries, is repudiated by Botafogo. For the club, football starts with peace in the stadiums and security for supporters. An atmosphere of insecurity and fear can never combine with sport.”

The club’s official media outlet also criticised Flamengo for posting a highly insensitive and provocative tweet after the game that read; “Where are you? You can’t escape, you can’t run.”

Football in all instances is a reflection of the social context which it finds itself and this case is no different. It is hard not to draw parallels between this fatal incident and the events that are currently unfolding in the neighbouring state of Espírito Santo, where Military Police strikes have led to riots, looting and violence that have resulted in the death of more than 120 people.

Brazilian football needs to clean up but it will only be able to do so in the context of a country where the various levels of government are able to pay public servants on time and in full, where violence is not normalised and human life is valued.

3 thoughts on “Another Dark Day for Brazilian Football”