Disclaimer: any Argentinean, or Argentina fan, may want to look away now. Go and watch YouTube videos of Maradona or something; it’ll make you happier.

Four games into his reign as manager of the Brazilian national team and things could not be going any better for Tite. He has won all of the games so far and has taken Brazil from sixth to first in Conmebol’s World Cup qualification table. To celebrate this fact I thought I’d take a look at the ex-Corinthians man’s first four games in numbers.

All the diagrams and numbers in the first section of the article come from Projeção de Gol, a new football analytics project focussed on the Brazilian league and the Seleção. You can find them on Twitter @ProjecaoDeGol.

In the rest of the piece I have used statistics from the Brazilian version of Goal.com, which is powered by Opta.

The following four charts represent the xG for Brazil and for their respective opposition in each of the four outings so far. xG is a measure of how many goals you would expect a team to score based on the quality of the chances they have created. I will not go into a lengthy explanation but you can read more about it here (in English) or here (in Portuguese). As I said at the top all these charts are from Projeção de Gol. 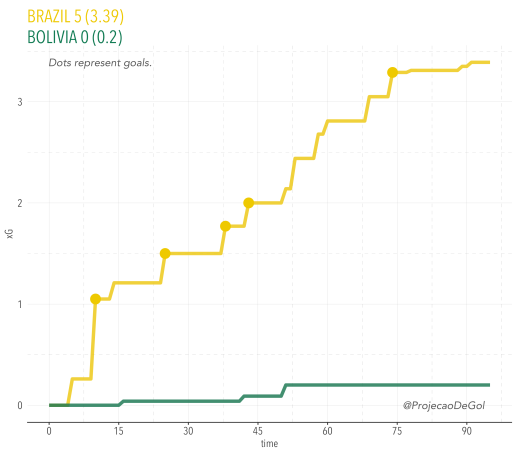 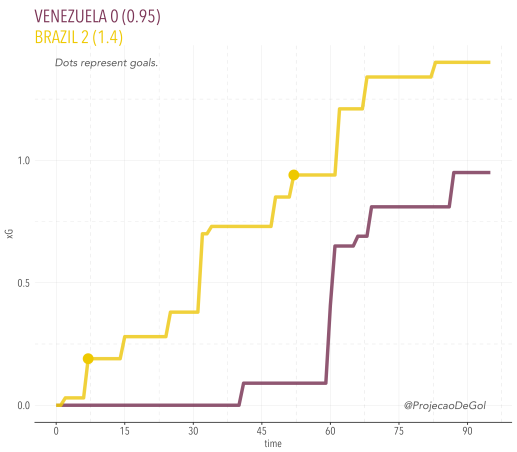 As you can see from the graphics Brazil created several clear scoring chances in all of their games, especially against Bolivia and Ecuador, but have outperformed their xG on each occasion. This may be down to the ice-cold finishing of Neymar and Gabriel Jesus (three of his four goals were sensational) or could have had some element of luck. There may well be a game in the near future where the goals won’t come so easily.

One of the most remarkable things one can take from these charts is how Brazil have limited their opposition to very few clear-cut chances. Venezuela had one very obvious opportunity, Solomon Rondón’s header after 60 mins, shown by the big jump in the line in the last diagram, and Colombia had two relatively good chances, one of which ended in the own goal, but Bolivia and Ecuador barely had a sniff.

Brazil’s average xGA over the four ties was 0.535, a highly impressive figure. To give some perspective, Tottenham, who have the Premier League’s tightest defence by a mile, having conceded just thrice thus far, had an average xGA of 1.1 for their first five games of the season. This sort of miserly defending is a Tite trademark.

As for individual xG and expected assists (xA) I have picked out two of the most talked about players from these games, Gabriel Jesus and Philippe Coutinho. The numbers are in chronological order.

Jesus, interestingly, has been extremely involved in the build-up play in the last three games after having no involvement against Ecuador. He appears to have sacrificed himself for the team against Colombia, being very creative yet not having many chances himself. He has also individually outperformed his xG, the sign of sang-froid in front of goal.

Bearing in mind that the Liverpool man only came on as a second-half substitute in the first two games these figures are notable. When moved across to the left for the game against Venezuela, into his favoured position, his xA increased significantly, and against a tougher opposition. In the games that Neymar is out owing to his continued petulance Coutinho should prove to be an acceptable replacement in this position.

The top scorer so far is Gabriel Jesus with four in four. This is credit to Tite who took a risk playing Jesus through the middle. The young City player had started the Olympic campaign there for the men in yellow but was moved over to the left with more success, with Neymar and Luan playing centrally. Tite decided to reverse what Micale had done in Rio and it has paid off handsomely.

This has been an area of vast improvement under the new manager and the stats reflect this. Passes per game:

The number of passes at home is noticeably higher than away from home and perhaps represents slightly different strategies inside and outside Brazil.

To make this number of passes you obviously need to control the possession of the ball and this is what Tite’s team have been doing:

The percentage of long passes also reflects the desire to keep possession and to make the game as compact as possible. It is as follows:

Again it is clear that the home and away strategies are slightly different, with more long passes in the two games outside Brazil.

The long passes they have made under Tite, many of which have come from Renato Augusto, have not been long punts but rather well-worked situations that quickly create a dangerous overload on one side of the opposition’s defence. Several goal-scoring opportunities have come as a result of this type of play.

Lastly the passing accuracy has also been good:

The lowest score was in the most recent game against Venezuela but it is not surprising given the poor conditions faced on the night.

It was only in the Venezuela game where they allowed a number of shots that could be considered dangerous, but even here only two of the shots were on goal. Against Colombia was the only game in which Brazil conceded yet Colombia did not have a single shot on target, the goal coming as Marquinhos put it into his own net.

Unlike Dunga Tite was consistent with his selection of defenders, only bringing in Filipe Luís for Marcelo against Bolivia and Venezula because of injury. Here is a manager who understands the importance of playing together consistently as a defensive unit. Marquinhos and Miranda have looked good together as a centre-back pairing and it will difficult for Thiago Silva to break into the side.

The stats here seem to back up the opinion of all the pundits that Tite has performed a minor miracle in turning around the national team in the way he has.

They have controlled games in a way they never did under Dunga and the improvement in Brazil’s passing game is perhaps the most important change the new coach has overseen.

The only thing that remains to be seen is whether Brazil can maintain the same defensive stability when faced with more dangerous opposition. Bring on Argentina in November.