These stats and graphs have all come from the excellent Projeção de Gol, a new football analytics project focusing on the Brasileirão. You can find them on Twitter @ProjecaoDeGol.

All the stats here were updated after the 25th round of the Brasileirão, which finished on Thursday last week.

Anyone who has ever had more than a glance at football statistics will know that the big daddy of all the stats is xG, or expected goals, a calculation of how many goals you would expect a team to score during a game based on the chances they create, so it seems an appropriate place to begin.

Palmeiras are top of the pile, as you would expect from looking at the league standings. In Dudu and Gabriel Jesus they have the two best attacking players in the country, as you will see below.

Atlético-MG, Corinthians and Flamengo are next with almost identical records, though it is worth noting that Corinthians xG has dropped significantly since Tite vacated the manager’s position, so one would expect them to be slightly further down this ranking come the end of the season. Atlético’s excellent attacking quartet of Robinho, Fred, Maicosuel and Lucas Pratto makes it unsurprising that they feature near the top of the list.

Cruzeiro are surprisingly high given their horrific start to the season but they are on the up now, seemingly a return for their good work that was perhaps going unrewarded merely through poor luck previously. The return of Mano Menezes appears to have injected a significant and much needed dose of confidence into all the players.

At the other end of the chart it seems Atlético-PR and in particular Ponte Preta are far outperforming their xG return. This could be a result of their own stingy defences, clinical finishing (particularly from William Pottker for Ponte) or good luck, or, more probably, some combination of the above.

Little comment needs to be made about América-MG’s horrible return; they are doomed and have been for some time. 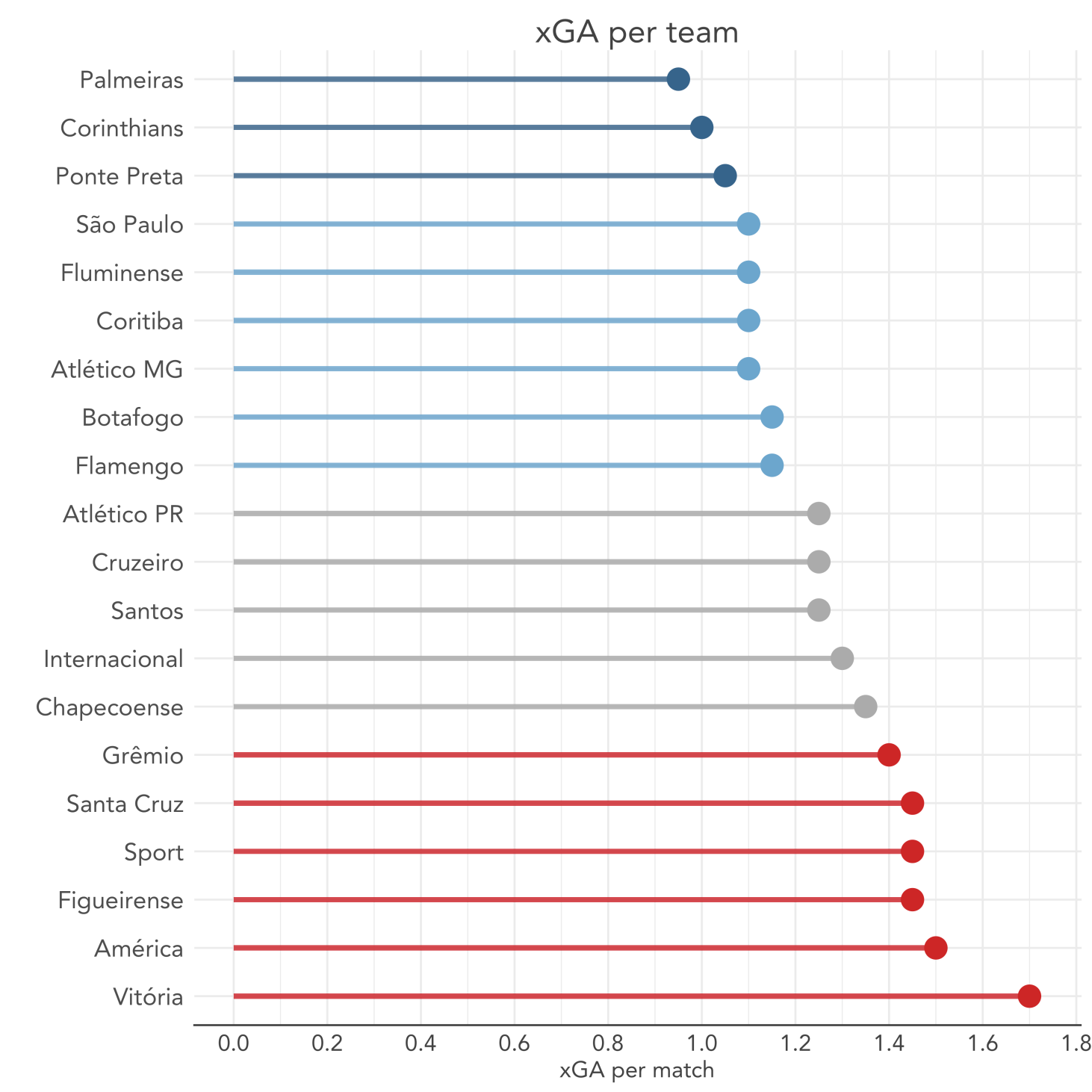 On the other side of the same coin as xG is xGA, or expected goals against. This chart shows that for Ponte Preta it is indeed their solid defensive unit that has propelled them up the table despite a poor xG.

Palmeiras again top the table, as they do in the real thing and the more of these graphics one takes into account the more it appears likely o Verdão will be lifting the trophy come the end of the season, providing no bad luck or inexplicable drop in form is encountered between now and the end of then. This being football one or both things are entirely possible.

Corinthians have retained the defensive solidity that defined their title win last year but again it must be noted that their xGA has increased significantly under the recently departed Cristóvão and it is difficult to see that rend being reversed now he has gone.

Fluminense’s fifth and sixth place in the xGA and xG charts respectively would suggest that they are a well-balanced side and could be well positioned to make a push for a Copa Libertadores berth come the end of the season.

Vitória, somewhat surprisingly, find themselves at the bottom of the pile, which indicates why they are mired in the middle of the relegation battle despite an xG similar to that of Santos, who are still fighting for the top-four.

Grêmio also appear in a shockingly low position given the amount of time they have spent floating around the top of the table this year but it appears their defensive frailty has caught up with them recently with a run of six games without a victory. Unfortunately this run has also cost their promising coach Roger his job.

Next is xG per game for the top 30 players in this regard in Série A. Gabriel Jesus tops off the chart, showing why Pep Guardiola put so much effort into signing him for Manchester City over the summer.

Second, and surprisingly close to Jesus, is Andrés Chavez who has already scored five league goals for São Paulo since his arrival in late July. São Paulo fans will be hoping that his clear goal-scoring threat will help to lift them out of the horrible form that they have been in for the last couple of months.

Interestingly Robinho does not even make it onto the list yet is currently joint-top scorer with Jesus, showing that he is highly efficient with the chances he gets. William Pottker, scorer of 10 goals this season, also does not feature, showing that he too has converted an unusually high percentage of his chances, though if penalties were included it may be a slightly different story.

Romero is the only Corinthians player on the list, demonstrating that the club directors really needed to sign a centre-forward, which they did. Gustavo from Criciúma since you ask, and no, he hasn’t found the net yet and hasn’t looked like doing so.

This chart is a plot of average xG per game against average number of shots per game and can be seen as a measure of the quality of chances a player gets. For those above the line their xG is higher than the average you would expect from the amount of shots they attempt at goal. This is a sign that they wait to get into high-quality goal-scoring positions before shooting or that their team is set up to give them better opportunities.

Gabriel Jesus again is far-and-away the best, having both the highest number of shots per game and an excellent conversion rate, which is credit to him and those around him who are charged with providing the ammunition

Another star of Brazil’s gold medal winning team, Luan, has the third highest number of shots per game but his xG is relatively low, which is statistical proof of his perceived propensity to shoot from distances that are not conducive to finding the back of the onion bag.

Paolo Guerrero of Flamengo also features a long way the wrong side of the line with over 2 shots per game but an xG of under 0.3. This can perhaps be attributed to the sort of service he receives at Flamengo which is generally seen as unsuitable for his style, though the addition of the intelligent playmaker Diego to the rubronegro squad may help in this regard.

Chavez again appears from the chart to be an excellent acquisition for São Paulo and Botafogo’s Sassá proves his efficiency, having only 1.2 shots per game but achieving an xG of almost 0.4, or 4 goals every 10 games.

Here we have xA, or expected assists, per game and the chart pretty much speaks for itself, if a player has a high xA but a low number of assists it is probably more to do with who is getting on the end of the chances they are creating than the player creating the chances.

A high xA has translated into a high number of actual assists for four of the top five. Dudu leads the way with 9 in the league this season, followed by Arrascaeta, Gustavo Scarpa and Diego Renan with seven a piece. Douglas meanwhile only has three assists so will probably not be particularly happy with his team-mates finishing ability.

Expect European and Chinese teams to be hovering around trying to whisk Dudu and especially Scarpa off across the Atlantic/Pacific in January.

Full-backs William of Internacional and Corinthians’ Fágner both contribute heavily to their teams attacking output but both have yet to receive the reward they deserve with only three assists each. 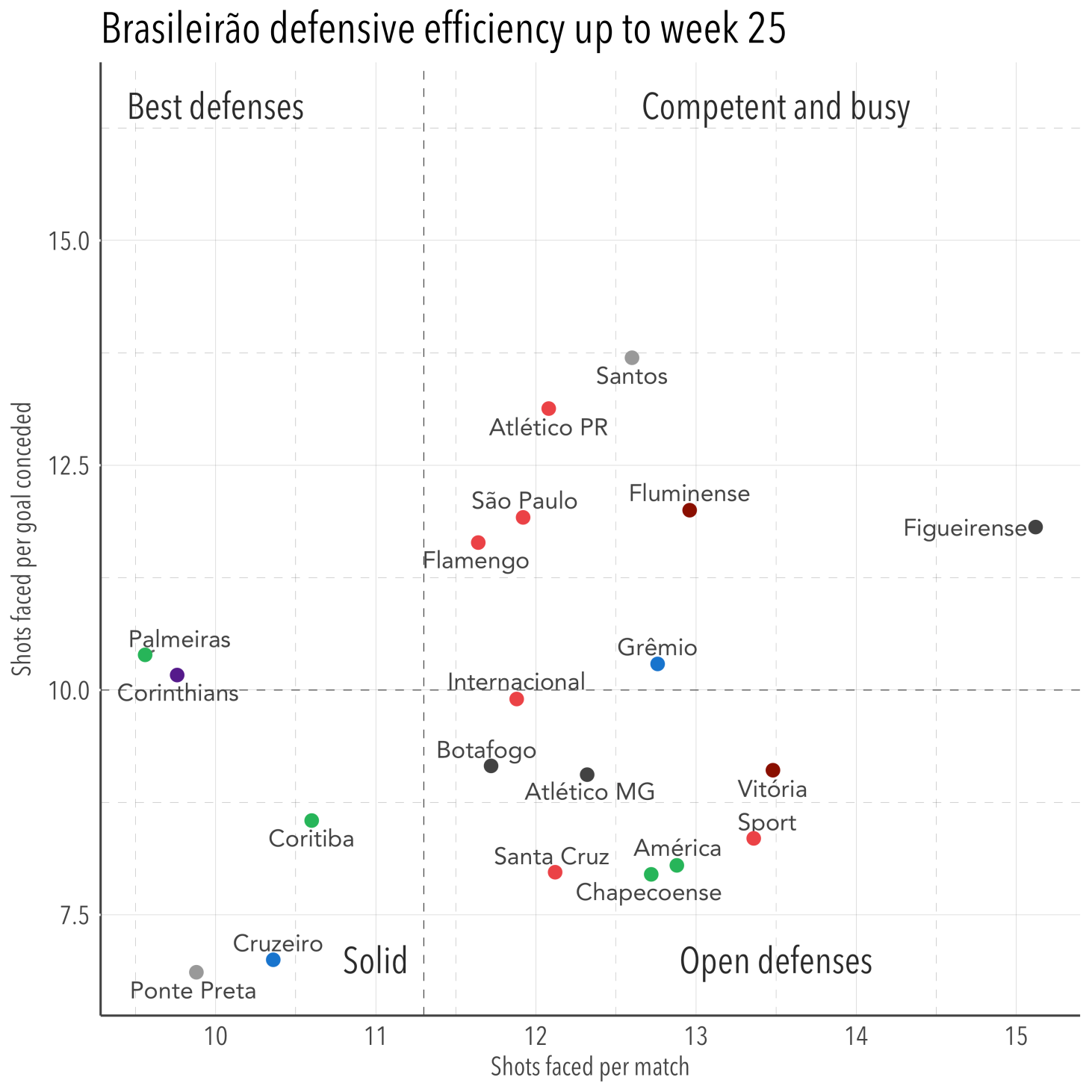 This chart is again fairly self-explanatory. Corinthians and Palmeiras are the tightest teams in the league. Being to the left of the line suggests that the team defends well as a unit, preventing the opposition from having attempts at goal.

Those in the top-right face a lot of shots but concede less frequently and those in the bottom-right are the teams that both allow a high number of shots on target and concede a high percentage of those shots.

Unsurprisingly most of these teams are near the bottom of the table. The one notable exception being Atlético-MG whose swashbuckling style leaves them open at the back as well as dangerous up top.

The most noticeable thing here is América-MG’s stunning incompetence, they only score with one in 15 of their shots and average under 11 shots per 90. A deserved return to Série B awaits.

Corinthians again feature in the correct portion of the graph but they haven’t managed to turn their statistical performance into league position and this probably has a lot to do with the decrease in output after the departure of Tite.

The teams in the bottom-left have fewer shots but need fewer to score a goal, again a sign of efficiency up front.

Overall one can deduce that Palmeiras are by far the best team in all departments and it will be a small footballing tragedy of they fail to lift the trophy come December.

Corinthians perform fairly well across the board but do not have a player with the extra quality in front of goal that they would need to take them to the next level.

Flamengo also appear to be slightly fortunate to find themselves in the league position that they do but they have come into form at the right time and could well give Palmeiras a run for their money.

At the other end América are already gone and from the stats it appears likely that Figuerense and Santa Cruz will be joining them in the 2017 edition of Série B. The fourth relegation spot could well go to Internacional, which would be the first relegation from the top-flight in their history.

Buckle up; the ride from here to the end of the season is set to be one full of twists, turns and tantalising turbulence.